Notre-Dame de Paris was one of my favorite places to visit during a first trip to Paris in 1972.

A friend, Bill Dalzell, a printer whom I knew from my workplace in Manhattan, encouraged me to visit the cathedral. He had written me a postcard once — he said similar things on other occasions – stating that it was the “most holy” place he ever visited.

The church was built in stages over a period of years during the thirteenth century. 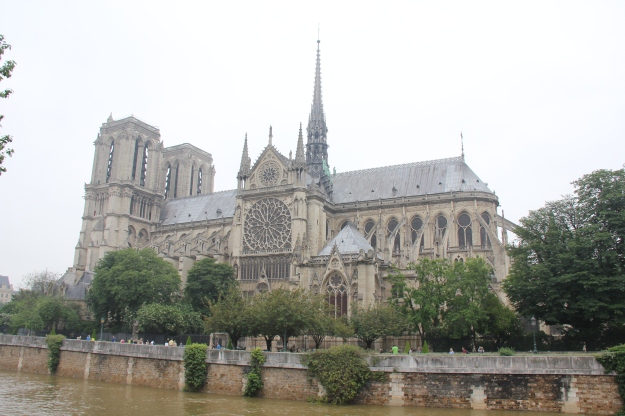 I went there last September but didn’t have a chance to go inside; it was closed by the time I arrived.

Did you go inside? What was it like? Did you have to wait in a long line and if so, was it worth the wait?

It was a long time ago. I do recall any difficulty getting in. I went there several times and observed the cathedral from both inside and outside. It is located on the Île de la Cité, which sets it apart from the rest of Paris.

I went to a mass at Notre-Dame and heard a homily in French. My French was fair, but I understood little of it. The priest spoke earnestly and with what appeared to be great conviction.

There was no difficultly with respect to attending or getting into the mass. This was in 1972.

You ask, “What was it [Notre-Dame] like?” I do not recall precisely, except that it was huge inside and dark, but very nice. And impressive, needless to say.

Perhaps the situation with Notre-Dame is like that with the Louvre now. I went back to Paris in 1999 with my wife and two sons. We went to the Louvre, which was close to our hotel. There was a terribly long line to get in, and everything about the visit was unpleasant. We did not stay.

I did not like visiting the Louvre much in 1972 either. The Louvre is way too crowded, so that one can barely look at the paintings. It seemed on our most recent visit, in the summer, to be overly air conditioned, and so forth.