The book is available on Amazon:

and the Kindle Edition is available at

Parts 1-4 Translated from The Turkish by Sir Wyndham Deedes

Çalikuşu (The Wren, 1922) is a novel by the Turkish author Reşat Nuri Güntekin (1889-1956). The novel was published in English translation in 1949 under the title of The Autobiography of a Turkish Girl. The English translation, by Sir Wyndham Deedes, was incomplete.

Deedes did not translate the entire novel. The Deedes translation has long been out of print and is almost impossible to acquire.

Now a new, complete translation has been published.

PREFACE TO THE NEW EDITION

This book is the result of an unexpected journey down a rabbit hole.

My mother loves foreign dramas. She fell in love with Feride and Kamran, the main characters of a Turkish drama that is available on Netflix. The drama is based on a Turkish book and she pleaded with me to find an English translation (if you know Filipino mothers, you will know the power of their soulful dark eyes and singsong voices). I figured the task would be an easy one, and the perfect Christmas present.

On Netflix, the drama is called Lovebird in English and Çalikuşu in Turkish. A bit of digging online revealed that Çalikuşu actually means “wren” and that the book is a Turkish classic written by Reşat Nuri Güntekin in 1922. An English translation by Sir Wyndham Deedes was written in 1949 but I could not find any available hardcopies. More digging, however, led me to an online file of the English translation, on which I spent many post-workday evenings manually typing it up and formatting it into a manuscript. Mission accomplished! I printed an actual physical book for my overjoyed mother that Christmas.

But I wasn’t fully content. My investigation also revealed that the English translation was incomplete. Fortunately, my engineering colleague and good Turkish friend, Tugrul Zure, was willing to check. I purchased the original Turkish version for him to compare with my manuscript and it was confirmed: the English version of Part 5 had left out many, many pages. Having now watched all the episodes on Netflix and also having read Deedes’ translation, I was intrigued and emotionally invested in Feride’s 192o’s Turkish life. The Netflix version of the story has deviations from the Turkish classic novel and ends much earlier than the classic novel, omitting Feride’s teaching adventures. How did Çalikuşu really end? If I could somehow procure a complete Part 5, would I even be allowed to put it together with Deedes’ Parts 1 to 4?

Luck was on my side. I began a search for the rights holder to Deedes’ work. Sir Wyndham Deedes passed away in 1956 without a wife or children. I instead found his grandnephew, Jeremy Wyndham Deedes, who was kind enough to allow me to use his great uncle’s work in assembling a complete English translation of Çalikuşu. To top it all off, my friend Tugrul was willing to help me translate the complete Part 5. Despite having moved away and preparing to have a baby with his wife on the other side of Canada, be continued to help me remotely.

So, a gigantic thank you Tugrul Zure and also to Jeremy Wyndham Deedes, who has graciously given his permission on behalf of the Deedes’ family. I can only hope that Reşat Nuri Güntekin and Sir Wyndham Deedes would approve.

Mom, enjoy! That goes for you too, Netflix Lovebird fans. 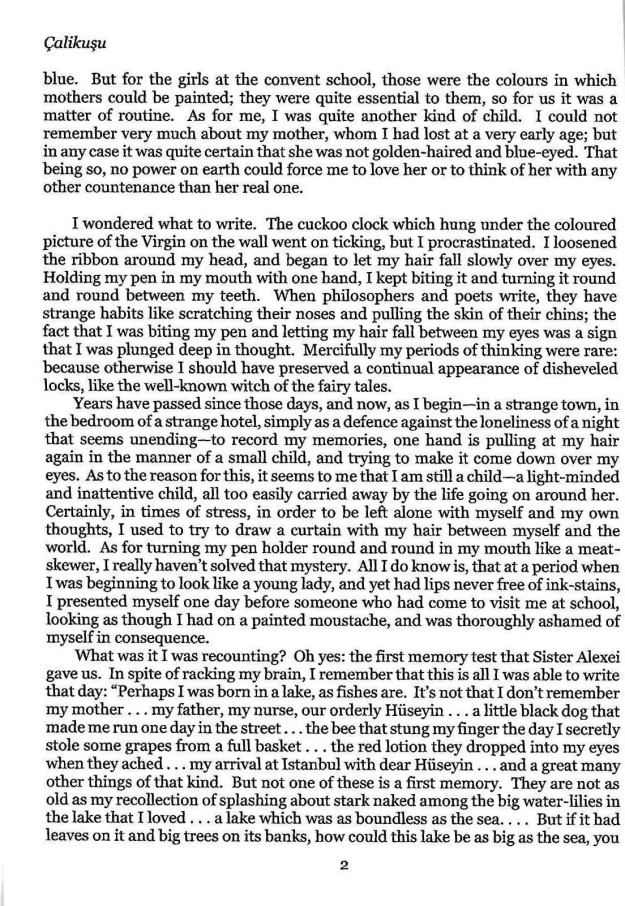 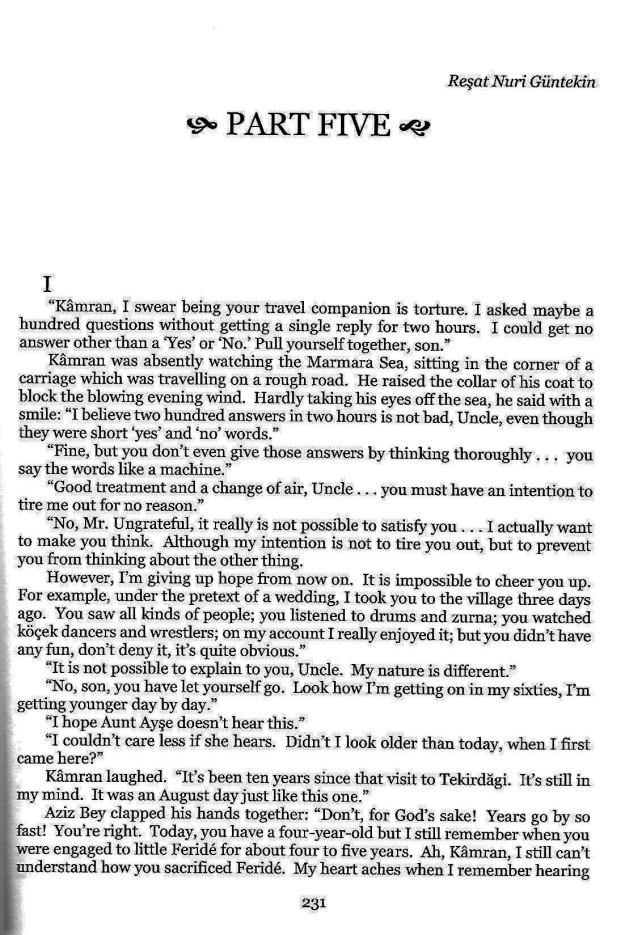 The first page of Part Five, which has hitherto not been translated into English.

The complete book is now available in English translation
SEE

See images from the 1986 film version below.

Plus Word document with synopsis/commentary. 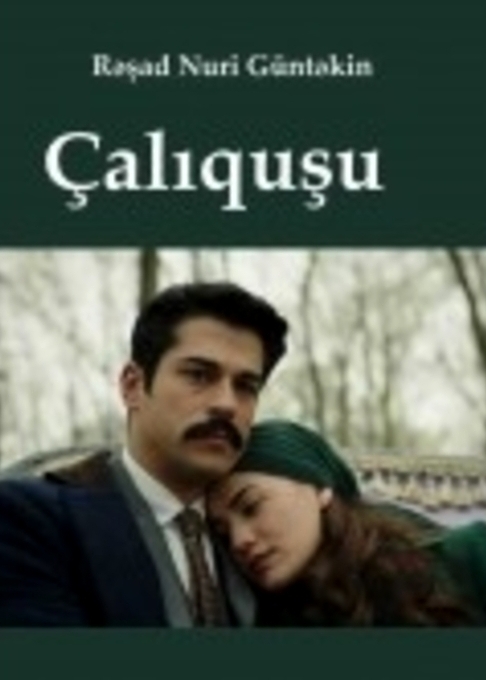 This post contains a downloadable Word document, above. The document is comprised of my detailed notes and commentary on Çalikuşu (English title, The Autobiography of a Turkish Girl), which are based upon a recent reading of the novel.

My brief introductory comments on this extraordinary novel are below.

Çalikuşu (The Wren, 1922) is a Turkish novel by Reşat Nuri Güntekin (1889-1956). The novel was published in English translation in 1949 under the title of The Autobiography of a Turkish Girl. It has been made into a film and television series based upon the novel. There have been at least eleven translations from the original Turkish.

Many people know and love the novel in the film or television version. (See link to YouTube below.)

The writing is extraordinary. The story is completely engrossing.

There is a touching subplot involving a little orphan girl, Munisé, in the young teacher’s class. The heroine shows kindness to the girl and eventually adopts her. She is one of the best and most affecting characters in the book.

The first person narrator, Feridé Hanim, the Turkish girl — nicknamed Çalikuşu (the “wren”) — is educated in a Catholic girls school yet is Muslim; the novel bridges the gap between two worlds and makes what is strange and exotic interesting and intelligible. (Note – Hanim is not a last name like Smith or Jones; rather, one should probably translate “Feridé Hanim” as “Miss [or perhaps Mademoiselle] Feridé.”)

The author’s deft style, his use of metaphor, his use of telling details are impressive. The book is full of wry insights; humor; and memorable, affecting characters.

The English translation, The Autobiography of a Turkish Girl, published in 1949 in London by George Allen & Unwin Ltd, is by Sir Wyndham Deedes. The translation seems imperfect, and Deedes did not translate the entire novel. Some of the “flaws” in the translation seem to consist of the use by the translator of Briticisms that nowadays would not be familiar to many readers.

Attached (above) is a downloadable Word document with my commentary on the novel, based upon notes I took while reading it in English, plus a plot summary. I only recently discovered the novel. To say I was charmed by it would be to put it mildly.

Note: Film versions of Çalikuşu are on YouTube at

A list of the film versions viewable on YouTube, with some information useful for determining what language the sound track is in

I have been told by fans of the novel that the 1986 film version of the novel, which was based on a television series, is by far the best one.

There are three films based on this novel. My favorite one by far is the original 1986 film. It starred the beautiful actress Aydan Şener. I highly recommend it. This film was based on a TV series.

The following is an exchange of emails regarding the English translation of Çalikuşu (The Wren, 1922), translated into English in 1949 under the title of The Autobiography of a Turkish Girl.

Hello, I came across your notes on an English translation of the book Çalikuşu by Reşat Nuri Güntekin via Google. I have been searching for a copy of this book for my wife for some time to no avail. Do you by chance know of a place that I could find a copy of this book?” — Dylan

However, I believe I directed someone else to this site (online bookstore), and I think they found that although the book was listed, the bookseller had already sold their only available copy.

You may wish to check, however.

Thank you so much for taking the time to help a stranger. I will definitely contact the seller you sent.

I just wanted to follow up with you regarding your request for a copy of the English translation of the novel Çalikuşu by Reşat Nuri Güntekin, which was translated into English in 1949 as The Autobiography of a Turkish Girl.

An enthusiast of the novel, an actress based in New York City, contacted me a while ago after reading my post and asked if I knew where she could get the English translation. She finally managed to procure one somehow, from a Turkish bookseller.

The actress and I started exchanging emails and we decided a new English translation was needed. We looked for a possible translator, and the actress suggested that a good choice might be an instructor and manager of a Turkish language school based in New York.

The actress and I met with the Turkish language instructor. She seemed interested, but unsure about whether she wanted to undertake the project. Over the course of time — and back and forth emails — the actress and the instructor became difficult to work with. They seemed to want to get rid of me. I had said that I wanted to be involved in the project in the capacity of proofreader and wordsmith/editorial consultant. The Turkish language instructor’s (our potential translator’s) knowledge of English is imperfect. I have extensive editorial experience. I felt that this was essential for the project’s success. They didn’t seem to think this was important. They were lacking in awareness of what such a project requires. Having completed a course in translation at Hunter College, I had learned how crucial knowledge of the target language is.

Eventually, the two stopped responding to my emails. But before that occurred, I did get an email on which I was copied from the Turkish language instructor (and would be translator) indicating that a new translation (into English) was in the works.

Good and bad news! I heard that someone already started translating Calikusu. I am not sure what publishing company but I heard form first hand that they started. They did not tell me the name of the publishing company after I told this project.

Even though I wanted to do it myself, it is still good that you guys will be able to read it soon.

Once I heard more news, I will update you guys.

The purported translator’s fractured English reveals why she would have needed help on the project. She was very full of herself and couldn’t see this. She has studied linguistics and has taught English as a second language as well as Turkish. She prided herself on her ability to understand and presumably translate the dated style of  Güntekin, a writer from the early twentieth century. She could not see, being so caught up in her own linguistic abilities and professional certifications, the plain fact that someone with native fluency in English and with impeccable command of grammar, style, and idiomatic usage was essential to the success of the project. An advanced degree and a couple of professional certifications can blind many people to their own complacency and ignorance. The mark of a true scholar, in contrast, is a profound respect for true excellence and an appreciation for it when they come to the margins of their own areas of expertise.

I will keep looking on the internet to see if a translation does get published.

P.S. There is a downloadable electronic version of the English translation (PDF) available on the internet, I believe. I do not know whether the sites are safe. 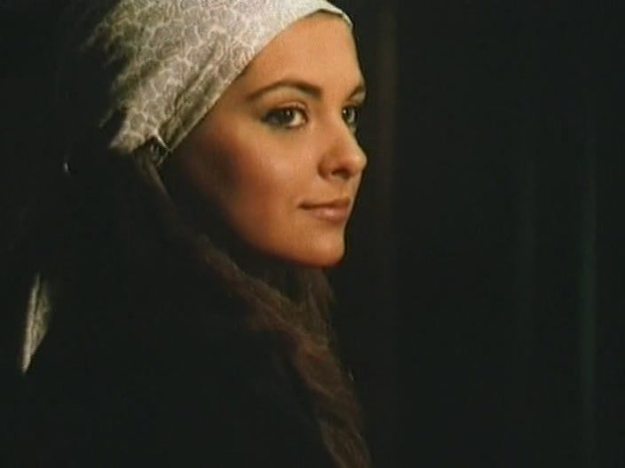 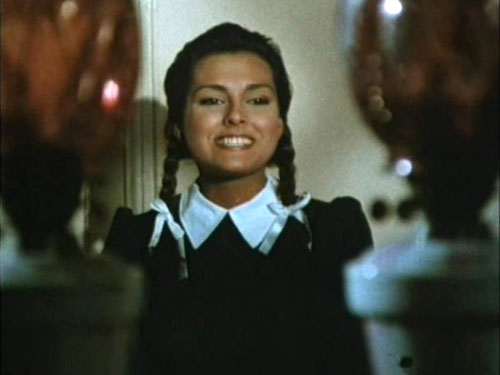 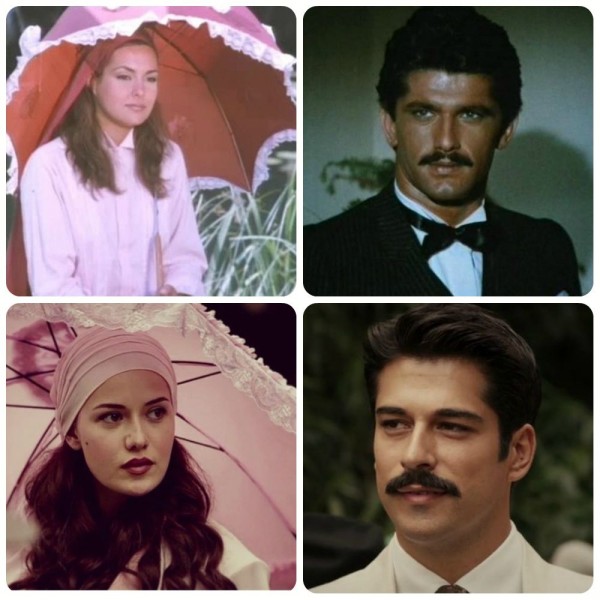