This is a brief piece of writing involving diverse reminisces which, in my mind, are somehow connected.

I guess I will begin with newspapers.

My parents subscribed to the Boston Herald. It was a Republican newspaper. The Boston Globe was the Democratic newspaper.

My parents were originally staunch Republicans. This all changed, totally, during the 1960’s, when they became liberal Democrats.

The Herald was a good newspaper. I would imagine that it was something like the Herald Tribune in New York.

I was an avid reader of the sports pages. I recall, to give just one example, reading about pro basketball games in the 1960’s. I used to marvel at Wilt Chamberlain’s point totals. In those days, he seemed to be averaging fifty points a game.

I was also aware of the tabloids, although I didn’t read them regularly.

One headline that made an enormous impression on me, on June 28, 1955, when I was nine years old, was “Harry Agganis Is Dead.”

Harry Agganis (1929-1955) was an All American football player at Boston University who signed after college with the Boston Red Sox and played briefly for them as their starting first baseman. He died suddenly and unexpectedly.

The Red Sox players wore black armbands afterwards. This somber thing made a big impression on me when I was watching games on TV.

Another headline I distinctly recall had to do with the famous Brinx robbery. This must have been in January 1956, when six of the robbers were arrested just before the statute of limitations was to run out.

I recall one photo in the Herald of Boston Celtics guard Sam Jones making a jump shot with seconds left on the clock. It was the decisive basket in a deciding playoff game. In the photo, Jones was in midair; the shot had just left his hands.

There was a long time cartoonist on the Herald, Francis Dahl, who was very good. Among other things, he did cartoons about sports. After a Red Sox game or series, there would often be a Dahl cartoon. It would summarize the game. There might be a caricature of catcher Sammy White, say, who had just had an impressive day at the plate.

Dahl was not mean. He did not demean or make fun of his subjects. His baseball cartoons, for example, would usually feature a player who had done well. The cartoon would contain several panels that would give you a kind of capsule summary of the game. They were lighthearted and fun.

I remember another photo that was featured in the Herald sports section in 1957. It made a big impression on me. It was third baseman Frank Malzone’s first full season with the Red Sox. It showed Malzone (specifically, his legs and feet) diving into the stands for a foul pop up.

I was a paper boy, briefly, in the sixth grade. The salary was something like two and a half dollars per week. I had an afternoon route at first and later a morning route.

The canvas bags, which you slung over your shoulder, seemed very heavy. You were supposed to curl the papers up and, somehow, by slapping them against your knee, configure them in such a fashion that you could throw them from the sidewalk onto a porch. Being naturally klutzy and inept, I never quite learned how to do this.

There were a lot of newspapers in Boston in those days, both morning and afternoon ones. I recall that one of the customers on my morning route in Cambridge was John Zimmerman. He was a musician, a bass player, and musical colleague of my dad. (See photo; John Zimmerman is on the right.) He subscribed to the Christian Science Monitor.

I had been told that Zimmerman, who moonlighted as a musician, had an advanced degree (Ph.D.?). So, I regarded him as some sort of egghead, which seemed to explain why he got a different paper from everyone else. 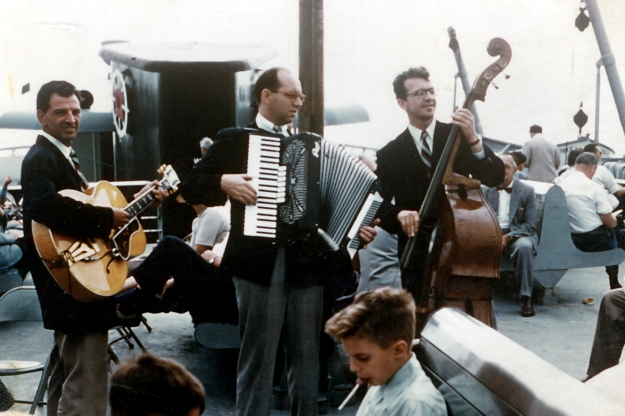 I didn’t last long as a paper boy. Actually, I quit. I told our boss, Mr. Gladden, that I had to quit because of my parents, that I was waking them up when I got up early. “I haven’t heard that one before,” he said, not being for a moment fooled by my excuse.

Which brings me back, in a roundabout way, via newspapers, to Frank Malzone. But first another digression.

In the sixth grade, an attractive unmarried member of the North Congregational Church in Cambridge, to which my family belonged, organized a boys’ choir. She was a big Red Sox fan, a season ticket holder. As an inducement, she promised that any boy who joined the choir would get to go to a Red Sox game with her at the end of the school year.

I joined the choir, and, because I was a monotone (as was so determined), I was relegated with the other monotones to the back row. The first hymn that we performed was “Fairest Lord Jesus,” a beautiful hymn.

We were duly taken, as promised, to a Red Sox game at the end of the school year — which was also the end of the church year since the parish, inexplicably from my point of view, closed for summer vacation) and were in box seats right behind the Red Sox dugout. We got an autographed ball with the team members’ signatures on it. I believe one of the signatures was Ted Williams’s. (I took the ball out to play with a friend when I was a teenager and ruined it.)

The choir director knew the Red Sox players well, and several came over before the game to talk with us. One was the six foot six inches tall starting pitcher Frank Sullivan. I was very excited to meet an actual ballplayer.

“Frank,” I blurted out, “did you get hurt the other day when you fell into the seats?” He was momentarily confused. “Oh,” he said, laughing, “that was the other Frank [Malzone]!”

I was referring to the play, a photo of which I had seen in the Herald (as noted above), in which Frank Malzone had dived into the stands in the pursuit of a foul ball.

Later, the choir director got Red Sox pitcher Tom Brewer to come and speak at our parish.

Frank Malzone was one of my favorite Red Sox players from that period. He played very briefly for the Red Sox in 1955 (20 at bats). In 1956, he had 103 at bats and batted .165. He blossomed and became a regular in 1957. That was the year I became a fan of his. He was an outstanding fielder and a good hitter with some power.

I recall an outstanding play of Malzone’s that I saw on TV, before instant replay. He made a diving stab of a line drive which killed a rally. It was just one play, but I remember it. Red Sox announcer Curt Gowdy (whom I grew up listening to) couldn’t stop raving about the play.

In those days, I was a devoted reader of Sport magazine. They had a feature article about Malzone in 1957. The article discussed Malzone’s disappointing 1956 season. It said that the reason he flopped was because he was despondent and couldn’t concentrate on baseball. His wife and he had lost a child in infancy.

I was wondering if the New York Times would mention this in their obituary of Malzone, who died, sadly, on December 29, 2015, at the age of 85, but they didn’t.

Once at a Liberal Religious Youth (LRY) conference at Star Island in New Hampshire, I was practicing softball in the lawn in front of the hotel. A fellow LRY’er, Tom Linehan, who admired me as an intellectual to be looked up to in that regard, was watching, unbeknownst to me. He said afterwards that I was scooping up grounders effortlessly and “looked like Frank Malzone out there.” The compliment and comparison pleased me greatly. I rarely got compliments on my sports ability.

One further note, George Plimpton’s book Out of My League, a fun read, is based on his experience and observations about baseball from pitching a couple of innings against a lineup of Major League all-stars. Malzone was one of the players in the lineup, which Plimpton pitched to once.