“Here is a letter written in 1992 by a ten-year-old girl to her parents. Countless girls write such letters from camp every summer. … We can make no claim of fame or masterpiece status for Elizabeth’s letter. This is but a scrap of writing, a page grown from the welter of human life like a leaf on a tree, born with countless others to be borne away by winter’s first blast. Elizabeth repeats herself, she misspells, and she’s focused on home, not art. Yet Elizabeth is sublime, and her letter glows with life; Shakespeare would be hard put to surpass her girlish passion. No matter how inexpert or unknown the pen, such writing will never die.” — Michael Lydon, Bad Writing (Patrick Press, 2001)

(Note: I have quoted from Michael Lydon’s book to corroborate the point of this post, but I have not posted the girl’s letter, discussed by Lydon, here. The letter which the title of this post refers to is posted below and is a different one.)

“The best letters are often not ‘literary.’ Simplicity and directness are keys. Plain, homely, everyday details make a letter a live piece of human tissue instead of a bloodless specimen.” — Roger W. Smith, “A Walt Whitman Letter; and, What Can Be Inferred from It about Letter Writing in General”

Posted below is a letter I received about fifteen years ago from my older son’s best friend. He was spending the summer in Poland with his grandparents, who had a farm in Poland. He emigrated to the United States in the 1980’s and met my son in the first grade. After receiving his letter, I sent my son’s friend some books to help relieve his boredom. He told me later that he  reed and enjoyed them.

I feel that my son’s friend’s letter illustrates perfectly the points about letter writing made by Michael Lydon and myself, as enumerated in the above quotations.

What I liked and appreciated most about the friend’s letter were his use of telling details and his directness, as well as his honesty. 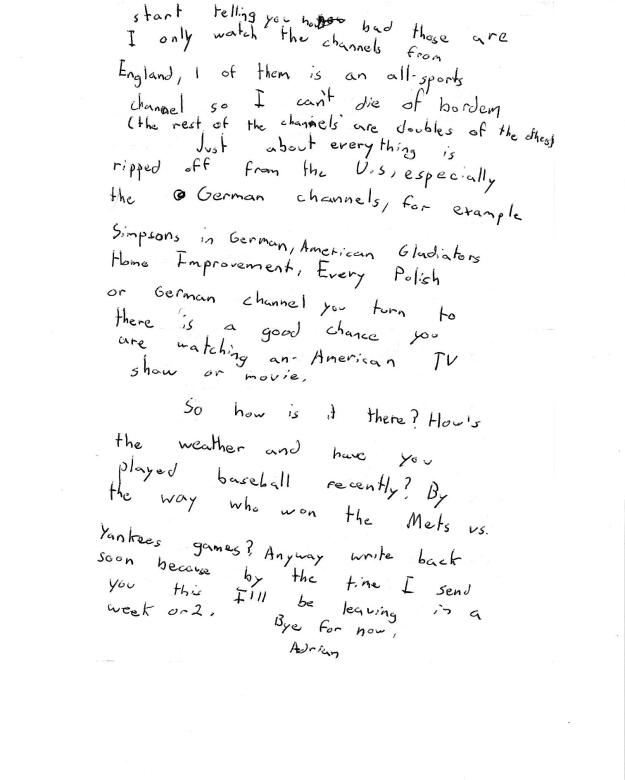