Henry T. Handy (1845-1916) of Cataumet, Massachusetts (part of the town of Bourne on Cape Cod) was my mother’s paternal grandfather. After a brief career as a whaler, he returned home and became a farmer.

This advertisement appeared in the Bourne, Falmouth, Sandwich (Mass.) Directory for the year 1900. 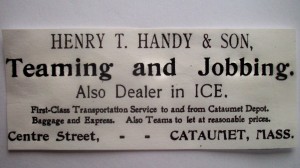